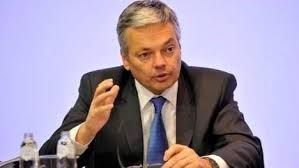 BRUSSELS, August 6, 2014 (WAFA) – Belgian Deputy Prime Minister and Minister of Foreign Affairs, Didier Reynders, just as EU High Representative Catherine Ashton, called, in a statement Tuesday, upon “all parties of the Israeli-Palestinian conflict to respect the humanitarian cease-fire of 72 hours.”

“The Minister is satisfied with the efforts that Egypt is making to end the cycle of hellish violence,” said the statement.

“This violence has made ​​too many civilian casualties already,” the statement said, adding: “He hopes that the humanitarian truce, with the support of the international community, including the EU, could turn into a permanent cease-fire that meets the expectations of the Palestinian people and the concerns about the safety of Israel,” the statement concluded.