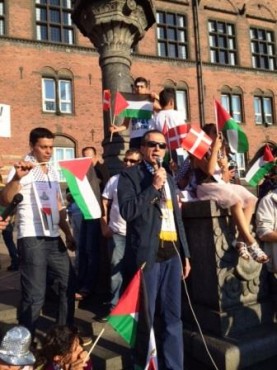 RAMALLAH, July 19, 2014 – (WAFA) – As a result of the ongoing exacerbation of the humanitarian situation in Gaza, Denmark takes the decision to provide an extraordinary grant of DKK 11 million (about $2 million) for water supply, medicine and improved protection of civilians, said Friday the Danish Representative Office to Palestine in a press release.

The press release quoted Danish Minister for Trade and Development Cooperation Mogens Jensen as saying: “The ongoing ‘fighting’ between Gaza and Israel is truly saddening and unfortunately has had great humanitarian costs. The destruction of water facilities has caused a lack of water for up to half of the people of Gaza. Moreover, hospitals and aid agencies only have 75% of the medicine needed to treat the victims of the conflict and to save lives. I have therefore chosen to grant DKK 11 million for the acute humanitarian response in Gaza.”

The Minister added: “With this grant Denmark is supporting the provision of ambulance services, medicine, psychosocial support and water supplies to the struggling civilians in Gaza. The ICRC has a powerful and respected voice vis-à-vis the partners of the conflict when it comes to compliance of international humanitarian law.”

“With this grant I contribute to the voice of the ICRC and an improved distinction between civilian and military targets. It is abhorrent that children playing on the beach risk getting killed. The temporary humanitarian ceasefire agreed yesterday]Thursday[ was a positive step but without the continuous observance of international humanitarian law, the civilian losses and the humanitarian needs only increase, and the aid workers will continue to have limited humanitarian access due to security considerations.”

The Danish contributions will be divided equally between the ICRC and the UN’s Emergency Response Fund for Palestine. The fund is considered one of the critical projects in the Humanitarian Strategic Response Plan to respond to the Gaza emergency and can cater for the most urgent needs resulting of the emergency, and the UN has therefore requested the international community for replenishment.

In addition to the Danish grant, Save the Children Denmark, the Danish Red Cross and DanChurchAid have been given permission to use a total of DKK two million ($ 360,000) from their humanitarian partnership agreement for psychosocial support, protection of children and food supply in Gaza.