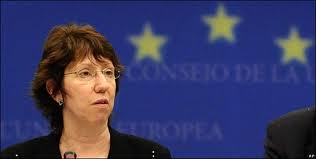 BRUSSELS, October 5, 2014 (WAFA) – Spokesperson of the EU’s High Representative Catherine Ashton condemned the recent Israeli decisions to approve a plan for new settlement activity in Givat Hamatos and to allow for further settlement expansion in the neighborhood of Silwan in East Jerusalem.

A statement, issued on Friday, stated: “This represents a further highly detrimental step that undermines prospects for a two-state solution and calls into question Israel’s commitment to a peaceful negotiated settlement with the Palestinians.”

“The parties’ commitment to a negotiated solution will only be credible if they refrain from unilateral actions that change the situation on the ground and threaten the viability of the two -state solution,” said the statement.

“We call on the Government of Israel to urgently reverse its decisions and put an end to its settlement policy in East Jerusalem and in the West Bank.”

“The EU will not recognize any changes to the pre-1967 borders, including with regard to Jerusalem, other than those agreed by the parties. We stress that the future development of relations between the EU and Israel will depend on the latter’s engagement towards a lasting peace based on a two-state solution,’ concluded the statement.