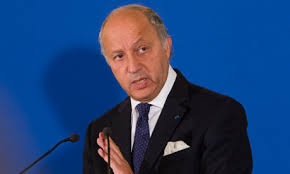 PARIS, August 4, 2014 (WAFA) – “The tradition of friendship between France and Israel is long-standing and Israel’s right to security is total, but this right does not justify the killing of children and the massacre of civilians,” Monday said French Minister of Foreign Affairs, Laurent Fabius in a press release.

“How many new casualties will be needed in order to stop what has to be called the carnage of Gaza?” he wondered.

“This is the reason why we support and demand the implementation of a real cease-fire as proposed by Egypt and stand ready, as French and Europeans, to bring an effective contribution to it.”

He added: “This is also the reason why a political solution, the parameters of which are known, is essential. This solution shall in my estimation be imposed by the international community as both sides have unfortunately showed their inability to conclude negotiations, despite numerous attempts.”

“Cease-fire, imposition of the Two States solution and Israel security: there is no other way than this,” he stressed.