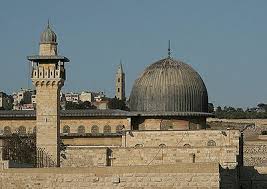 RAMALLAH, September 14, 2014 (WAFA) – Ministry of Foreign Affairs condemned, in a statement Sunday, the continuing provocative visits by Jewish fanatics to al-Aqsa Mosque, as well as the denial of entry of Palestinian Muslim worshipers to the mosque by the Israeli authorities.

Moshe Feiglin, an extremist far-righter and deputy speaker of the Israeli Knesset, toured al-Aqsa Mosque in the early morning hours under heavy Israeli police protection. During the visit, women of all ages and men under the age of 50 were not allowed to enter the mosque, forcing many of them to perform the dawn prayers outside the mosque’s gates.

The MOFA warned that the temporal division of the mosque could turn into a de facto measure and a prelude to spatial division, holding the Israeli government fully responsible for the repercussions of such violations.

The ministry said that this kind of division is an attempt to hide the ‘occupation of settlement’ and could drag the entire region into a sectarian and religious war.

The ministry called upon the United Nations and the international community to uphold their responsibility towards the Palestinian people, including their right to worship stipulated under international law and the Geneva Conventions, as well to force Israel, the Occupying Power, to abide by the international legitimacy resolutions.