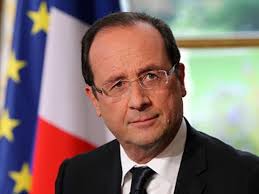 PARIS, August 4, 2014 (WAFA) – The French President, Francois Hollande, in a statement, deemed the Israeli bombing of UN-run school in the Gaza Strip on Sunday, an ‘unacceptable’ matter and called for ‘accountability’ for those responsible.

Hollande denounced the bombing of a school in Rafah which caused the death of at least ten people who had sought refuge at the school.

In the statement, the French president adds his voice to the UN Secretary-General Ban Ki-moon ‘to demand accountability for those responsible for this violation of international law’.

It is noteworthy that this was the third attack on UNRWA-run schools in ten days.