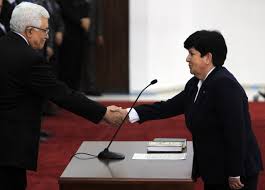 RAMALLAH, September 14, 2014 (WAFA) – The Israeli authorities on Sunday prevented Minister of Education Khawla Shakhshir access to the Gaza Strip for the opening of the new school year, which was delayed by almost three weeks due to the recent Israeli aggression on the coastal enclave.

A press release by the Ministry of Education said that Israel denied Shakshir a travel permit allowing her access into Gaza, a procedure “which proves the ugliness of the Israeli occupation and its practices against the education process, in flagrant violation of all international and humanitarian conventions which affirm the right of education; a fundamental right guaranteed worldwide.

As many as 500 thousand male and female students headed Sunday morning to their schools, marking the beginning of school year in war-battered Gaza, following two weeks of delay; during the latest aggression on Gaza schools were used as shelters for the internal displaced Palestinians, whose houses were bombarded during the assault on the strip.

Officials from the Ministry of Education said the first week will be dedicated to entertainment activities in order to help relieve the psychological strain among students, following weeks of psychological pressure resulting from the Israeli barbarous war.

But Adnan Abu-Hasna, a media staff with the United Nations Relief and Works Agency, said all school districts in Gaza are beginning the school year today, with the expectation of Beit Hanoun, where hundreds of displaced families are yet to evacuate several UNRWA sheltering schools, depriving around 9,600 students from joining their schools.

He stressed they will exert all possible efforts to insure the start of school in Beit Hanoun.

The Israeli war on Gaza, which lasted from July 8 to August 26, claimed the souls of more than 2,000 Palestinians and left more than 10 thousand wounded. Moreover, thousands of houses were partially or completely demolished under the Israeli massive airstrikes and artillery shelling.

The MOE called upon the relevant bodies to immediately act against the Israeli policies aimed at undermining education and propagating ‘ignorance’ among the Palestinian people.