Lawyer of the Palestinian Prisoner’s club (PPC), in s a statement, said that an Israeli court renewed the administrative detention of 30 prisoners, who have previously received a number of similar orders. The other six received new detention orders.

The detainees included member of the Palestinian Legislative Council, Nayef Rajoub, from Hebron. He was sentenced to four months under administrative detention.

Addameer human rights association stated that, “Palestinians have been subjected to administrative detention since the beginning of the Israeli Occupation in 1967 and before that time, under the British Mandate.”

“The frequency of the use of administrative detention has fluctuated throughout Israel’s occupation, and has been steadily rising since the outbreak of the second intifada in September 2000,” added Addameer.

Palestinian detainees have continuously resorted to open-ended hunger strikes as a way to protest their illegal administrative detention and to demand an end to this policy which violates international law.

Following are the names of the 33 detainees who received administrative detention orders: 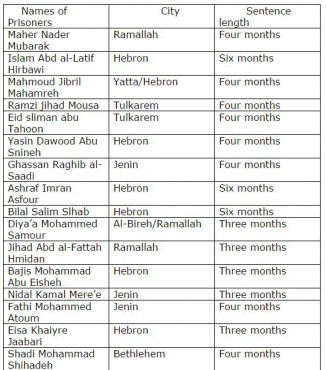 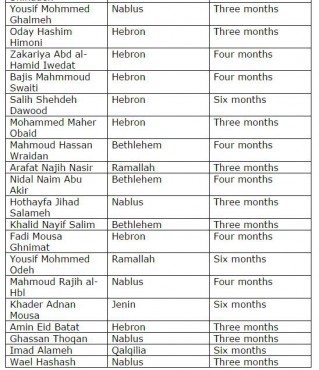