The orders ranged from three to six months; and could be extended. Halabi said Israeli authorities have issued 15 new administrative detentions and renewed six others against prisoners detained in Israeli jails for months and years without indictment.

Administrative detention is a procedure that allows the Israeli military to hold prisoners indefinitely on secret information without charging or allowing them to stand trial.

The Israel human rights group B’Tselem said, “International law stipulates that [administrative detention] may be exercised only in very exceptional cases – and then only as a last possible resort, when there are no other means available to prevent the danger.”

“The Israeli practice of administrative detention has been condemned on numerous occasions by the UN Human Rights Office and the Human Rights Committee that oversees implementation of the International Covenant on Civil and Political Rights, which Israel has ratified,” said the UN News Center.

Following are the names of the 21 detainees who received administrative detention orders: 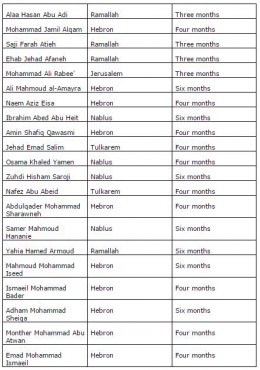