Israel human rights group B’Tselem says that, “International law stipulates that [administrative detention] may be exercised only in very exceptional cases – and then only as a last possible resort, when there are no other means available to prevent the danger.”

“Israel’s use of administrative detention blatantly violates the restrictions of international law. Israel carries it out in a highly classified manner that denies detainees the possibility of mounting a proper defense.”

Palestinian detainees have continuously resorted to open-ended hunger strikes as a way to protest their illegal administrative detention and to demand an end to this policy which violates international law.

In April 2015, the United Nations Human Rights Office (OHCHR) expressed concern by the continued and increasing use of administrative detention by Israeli authorities against Palestinians.

Following are the names of the 33 detainees who received administrative detention orders: 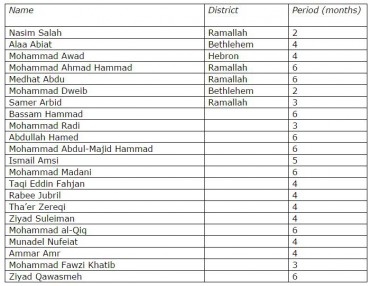