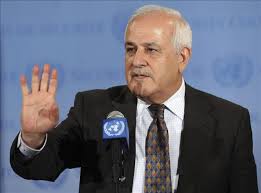 NEW YORK, July 23, 2014 (WAFA) – “With no regard to human life, Israel, the occupying Power, continues to slaughter entire families,” Tuesday said Palestine’s Permanent Observer to the United Nation, Ambassador Riyad Mansour, during an open debate on the situation in the Middle East at the United Nations Security Council.

“Israeli bombardment – including missile airstrikes, bombs and artillery shelling by air, land and sea at densely-populated areas – has also resulted in the destruction of more than 1,000 homes and damage to more than 18,000 other homes,” added Mansour.

He underscored: “Fear and panic have gripped the population, leading to the displacement of more than 100,000 people, who are now sheltering in UNRWA schools, already double the number of Palestinians who sought refuge in the Agency’s schools in the Israeli war on Gaza of 2008-2009.”

“When hospital floors are drowning in the blood of innocents, corridors are filled with the deafening screams of pain of the wounded and cries of the grief and anguish for loved ones killed, and doctors, with barely any supplies and deprived of sleep and sustenance struggle courageously …. The international community has failed to enforce the rule of law, and failed its promise to humanity.”

“On behalf of the Palestinian people, we ask: What is the international community doing to stop this bloodletting, to stop Israel’s atrocities? What is the Security Council doing to uphold its commitment to protect civilians in armed conflict and uphold the law and the Charter”? wondered Mansour.

“Israel’s impunity must be halted and the pretexts for its crimes rejected,” he ascertained.

“We reiterate that it is no coincidence that this latest aggression was launched amid increased international pressure on Israel in the peace process; international acceptance of the Palestinian unity government; intensifying world condemnation of the settlements, settler terror, provocations in East Jerusalem, the Gaza blockade, the crisis of the Palestinian prisoners and detainees, and Israel’s destruction of the two-state solution, and the growing global calls for boycott, divestment and sanctions against Israel.”