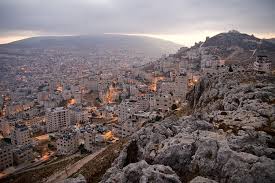 NABLUS, September 29, 2014 (WAFA) – Israeli army on Monday destroyed the electricity network of Kherbet at-Tawil, a small village located to the east of Nablus, according to local sources.

Hamza Diyariya, of the Anti-Settlement Committee, told WAFA that an Israeli army force, backed by heavy machinery, stormed the village and started to uproot power poles of the main electricity network in the village.

To be noted, the village has been targeted by repeated Israeli violations.