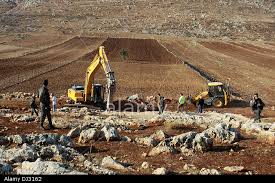 JERUSALEM, November 15, 2016 (WAFA) – Israeli municipality of West Jerusalem demolished on Tuesday a commercial store in Jabal al-Mukabir neighborhood in Jerusalem, in addition to an animal barn and agricultural room in Silwan neighborhood, according to local sources.

Israeli police accompanied by staff from the Israeli municipality of West Jerusalem, where they demolished a commercial store belonging to a local Palestinian, under the pretext of construction without permission.

The authorities also demolished a stable and an agricultural room in a-Thawri neighborhood in Jerusalem, also for being constructed without an Israeli permit. Owner of the structures, Alaa Shweiki, said the demolition came despite he has paid some $10,000 in fines to the Israeli municipality for the unpermitted demolition.

To be noted, Israel rarely grants Palestinians permits to build in the West Bank, including East Jerusalem, although the estimated 550,000 Jewish Israeli settlers are more easily given building permits and allowed to expand their homes and properties.