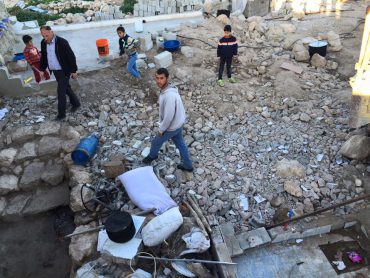 HEBRON, November 15, 2016 (WAFA) – Israeli forces on Wednesday demolished a residential structure and a community center in the village of Um al-Kheir, south of Hebron in the West Bank, according to local sources.

WAFA correspondent said an Israeli army force accompanied by staff from the Israeli Civil Administration broke into the village, where they demolished a community center and a tinplate-made house, under the pretext of construction without a permit.

The center was used by the village’s residents for educational and social purposes. It was demolished first in August this year by local villagers, before it was demolished again this time.

Meanwhile, the Israeli army notified Palestinians in the town of Beit Ummar, north of Hebron, to stop the construction of two homes in the town, also under the pretext of lacking an Israeli construction permit.

Israel rarely grants Palestinians permits to build in the West Bank, including East Jerusalem, although the estimated 550,000 Jewish Israeli settlers are more easily given building permits and allowed to expand their homes and properties.

Nearly all Palestinian applications for building permits in Area C – the 60 percent of the West Bank under full Israeli military control – are denied by the Israeli authorities, forcing communities to build illegally.