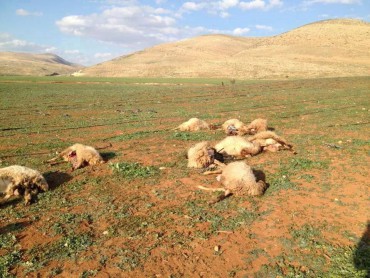 NABLUS, January 5, 2015 (WAFA) – Around 16 sheep were killed on Monday in the village of Aqraba to the south of Nablus after eating plants sprayed with a toxic substance sprayed by an Israeli settler, according to an activist.

Member of the anti-settlement committee in Aqraba, Yousif direyeh told WAFA that 16 sheep were found dead after grazing in the fields to the east of the village.

He said that following an investigation, it turned out that a settler from the nearby illegal settlement of ‘al-Hamra’ was apparently seen spraying toxic pesticides in the area known to be used by locals for grazing their livestock.

Residents of Aqraba, who rely on farming and raising livestock as a main source of living, are constantly harassed by settlers; despite constant complaints by locals, Israeli forces often ignore such complaints and rarely prosecute settlers for crimes against Palestinian residents.

In many cases, forces offer protection to settlers and turn a blind eye to attacks committed against locals.

The village of Aqraba is surrounded by illegal settlements making it vulnerable to attacks by settlers, who aim to make it difficult for Palestinians to live there, thus forcing them out of their land for the benefit of settlements expansion.

Settlement activities are illegal under international law. From 1967 to late 2012, 125 Israeli settlements were established in the West Bank.

According to B’Tselem – the Israeli Information Center for Human Rights in the Occupied Territories, “Although the West Bank is not part of Israel’s sovereign territory, the settlements and the settlers are generally subject to Israeli law. As a result, the settlers enjoy all the rights of citizens in a democratic state.”

“Meanwhile, Palestinians continue to live under martial law and are thereby systematically deprived of their rights and denied the ability to have any real impact on policymaking with respect to the territory in which they live,” said the center.

The weekly report published by OCHA, which covered the period between 23 and 29 of December 2014, documented five incidents of Israeli attacks on Palestinians in the West Bank, resulting in injury and damage to Palestinian property, bringing the total number of such incidents in 2014 to 330, compared to 400 in the equivalent period in 2013.