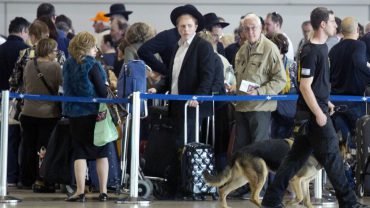 HAIFA, March 7, 2017 (WAFA) – The Israeli parliament’s new law that bans entry of foreign nationals and of Palestinians from the West Bank if they or the organizations they belong to publicly expressed support for boycott against the State of Israel or against Israeli settlements violates the most basic tenets of democracy, Adalah – The Legal Center for Arab Minority Rights in Israel and The Association for Civil Rights in Israel (ACRI) said in a joint statement on Tuesday.

The Israeli parliament, the Knesset, approved the law in its final readings on Monday night.

“This law violates the most basic tenets of democracy by making political opinions a consideration that may prevent non-citizens from entering Israel and the Occupied Palestinian Territory (OPT). Those seeking to enter the country most certainly need not align their political positions with those of the current Israeli government in regards to the occupation,” said the two rights groups.

“This law is also expected to pose a particularly serious blow to countless Palestinian families living in Israel and in East Jerusalem, whose members hold a temporary residency status or a temporary military-issued permit. These individuals will now be vulnerable to a revocation of their status and permits based upon their political opinions.”

“No visa and residency permit of any type will be given to a person who is not an Israeli citizen or does not have a permit for permanent residency in the State of Israel if he, [or] the organization or entity for which he works, has knowingly issued a public call to impose a boycott on the State of Israel, as defined in the Preventing Harm to the State of Israel through Boycott Law, 5771-2011, or has committed to participate in such a boycott.”

The 2011 Boycott Law states that it applies to any boycott against Israel and against the territories under its control, that is, the occupied West Bank.

Adalah and ACRI had sent a letter to Knesset members on January 30 urging them to vote against the bill and stressing that it would infringe upon freedom of expression.

“The Israeli interior ministry is not authorized to stand at the country’s front gate and decide for Israeli citizens and Palestinian residents of the OPT – who are dependent on Israeli border crossings – which opinions and perspectives are worthy of being heard. Freedom of expression is not just the right to express oneself, but also the right to be exposed to different perspectives – even those perspectives considered outrageous and infuriating by the majority of [Jewish] Israelis. Preventing the entry of an individual into the country does not only harm the freedom of expression of those whose entry has been barred, but also the freedom of expression of Israeli citizens and Palestinian residents of the OPT.”