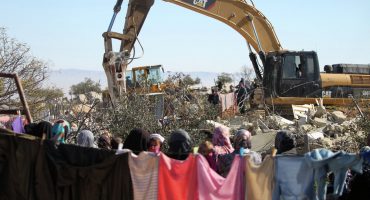 RAMALLAH, November 16, 2016 (WAFA) – The spate of demolitions of Palestinian structures by Israeli bulldozers in Jerusalem and the West Bank hit the front page headlines in Palestinian dailies on Wednesday.

Al-Quds said Israeli forces demolished a mosque under construction and other structures in the East Jerusalem neighborhoods of Sur Baher. Silwan and Jabal al-Mukabbir as well as a community center in the southern Hebron district village of Umm al-Kheir.

Furthermore, Israel’s move to approve the bill which s the Muslim call to prayer also hit the front page headlines in the dailies.

Al-Quds reported that Ahmad Tibi, an Arab member of the Israeli parliament, the Knesset, as stating that he has managed to suspend discussion of the bill at the Knesset for a while.

He was also reported as stating that orthodox Jewish political parties blocked the bill because they feared it would impact the Jewish use of sirens to announce the commencement of the Sabbath on Friday evening.

Al-Ayyam and al-Hayat al-Jadida said the vote on the bill in the Knesset was postponed.

Highlighting official reactions to the bill, the dailies reported Jordan as stating any Israeli decisions on Muslim call in Jerusalem’s Al-Aqsa Mosque is null and void.

Furthermore, the dailies spotlighted Israel’s vote on the so-called “Formalization Bill” that wouldretroactively legalize settlement outposts across the West Bank.

Al-Quds said the Knesset would vote Wednesday on a bill that would retroactively legalize settlement outposts on “private Palestinian lands” across the West Bank.

Highlighting international reactions to the bill, the dailies said Egypt slammed Israel’s move to approve the bill. Al-Ayyam and al-Hayat al-Jadida added France and the US also slammed the draft legislation.

Al-Ayyam reported settlement watchdog, Peace Now, as warning the Formalization Bill would provide a cover for the legalization of hundreds of settlement outposts that were established on privately-owned Palestinian land across the West Bank.

Al-Ayyam said Israel appointed a new ambassador to Turkey who would assume the post that has been empty since 2010.