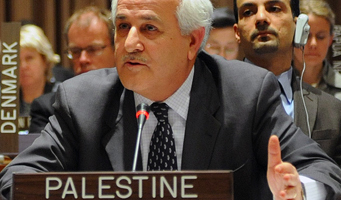 NEW YORK, August 23, 2014 (WAFA) – Ambassador and Permanent Observer of the State of Palestine to the UN Riyad Mansour stated that Israel continues to terrorize the Palestinian civilian population.

In identical letters sent Thursday to the UN Secretary-General, President of the Security Council and President of the General Assembly, on  the ongoing Israeli onslaught on Gaza, Mansour stated: “In a blatant contempt for the call reiterated yesterday by the UN Security Council for an immediate ceasefire, Israel, the occupying power, continues its military airstrike attacks against the Gaza Strip, terrorizing the Palestinian civilian population as it wrecks further death, injury and destruction.”

Mansour pointed out that “at least over 29 Palestinians were ‘deliberately and wantonly’ killed by the Israeli occupying forces in missile airstrikes, drone attacks and bombings on densely populated civilian areas and that Israel resumed its illegal policy of targeted assassinations against Palestinians, boasting of its extrajudicial killing of several people in recent days in attacks and also killed many civilians, including multiple members of families.”

Mansour stressed that “the willful killing and injury of persons is considered among the graves breaches defined in Article 147 of the Geneva Convention relative to the Protection of Civilian Persons in Time of War,” calling for holding Israel accountable for its war crimes and crimes against humanity.

Mansour also pointed out that the number of displaced persons fleeing their homes for safety has dramatically increased due to the terror and panic caused by the ongoing Israeli military attacks, drawing the international community’s attention to the enormous humanitarian needs for water, food, medicines, hygiene and other essential services to these families.

He also reiterated the appeal for urgent donor support for the provision of emergency relief and assistance to these families through UNRWA and partner UN agencies.

Citing Gaza-based UNICEF Field Office information, Mansour pointed out to the disproportionate suffering of children from the traumatic impact of the Israeli onslaught and the consequent insecurity, fear and despair.

Mansour referred to the situation in the West Bank, particularly settlement expansion, home demolitions, arrests and raids. He stated: “Israel, the occupying Power, has been relentless in its oppression and torment of the Palestinian civilian population in the rest of the Occupied Palestinian Territories, including East Jerusalem. The illegal Israeli settlement campaign, home demolitions, arrests of Palestinians, including children, military raids of towns, villages and refugee camps, and all others methods of repression continue to be perpetrated by the occupying Power against the population.”

In conclusion, Mansour condemned the infliction of such trauma and terror on the Palestinian people, individually and collectively, by Israel, pledged to continue relentlessly his calls for ending all of these illegal, inhuman and destructive Israeli policies and practices and holding the Israeli government officials, military personnel and settlers accountable for all of this.

He also reiterated his calls for an end to the Israeli military aggression being waged on Gaza and other crimes against the Palestinian people, calling the international community to assume their legal responsibilities in this regard.