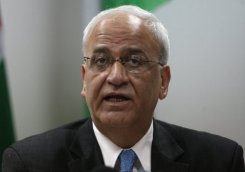 Before dawn this morning, Israeli forces raided the home of Palestine Legislative Council Member, Khaleda Jarrar. While there, the forces issued Jarrar a military order instructing her to abandon her home in Ramallah, and confining her to a specified area of Jericho.

“This unlawful order is yet another manifestation of Israel’s widespread and systematic attack against the Palestinian civilian population, and is in clear contravention of Israel’s obligation under international law and treaties to respect the fundamental human rights of individuals, including the rights to self-determination, freedom of movement, privacy, and protection of the family,” said Erekat.

“Moreover, the issuing of this order effectively amounts to attempted forcible transfer, unlawful confinement and persecution, all of which are crimes punishable under the Rome Statute of the International Criminal Court and under the universal jurisdiction provisions of the majority of States,” added Erekat.

The Chief Palestinian Negotiator condemned ‘in the harshest terms’ this illegal Israeli order as well the continued detention or administrative detention of 36 additional members of the Palestine Legislative Council, calling upon the Inter-Parliamentary Union to “take concrete measures against Israel’s harassment of democratically elected members of the Palestinian parliament.”

He also called upon the international community and domestic, regional and international human rights organizations to “speak out in order to prevent the enforcement of this unlawful order and, thereby, to prevent yet another Israeli crime against the Palestinian population.”