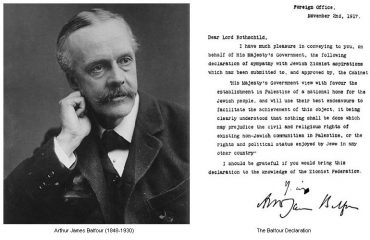 GAZA, October 19, 2017 (WAFA) – The Palestine Liberation Organization’s (PLO) refugee department condemned on Thursday British government plans to celebrate the centennial of the infamous Balfour Declaration of November 2, 2017, saying it was the cause for the expulsion and displacement of the Palestinians from their homeland, while promising to sue Britain unless it goes back on the celebrations.

Zakaria al-Aga, member of the PLO’s Executive Committee and head of its refugee department, strongly protested in a press statement the British government’s celebrations of 100 years for the Balfour Declaration and its invitation of Israeli officials to attend the celebrations.

“Holding the celebrations is considered a hostile act toward the Palestinian people and portrays Britain as an enemy of what is right, justice and of humanity,” he said.

Agha said that instead of celebrating the Balfour Declaration, Britain should apologize to the Palestinian people for the declaration, which it has refused to do so far.

He warned that proceeding with this, the Palestinians will be compelled to sue Britain over its declaration and pursue this case at international forums unless Britain apologizes to the Palestinian people, acknowledges that the Balfour Declaration was a historic mistake and recognize the Palestinian state on the June 4, 1967 borders with East Jerusalem as its capital.

He said the Palestinians have started a series of activities at home and abroad to commemorate this infamous event, which will culminate in a central activity on November 2 through sit-ins in front of British embassies all over the world.

The promise was used by the world Zionist movement to compel Britain to allow Jewish immigration to Palestine during its occupation of the Arab country from 1922 until 1948 when it handed Palestine over to Israel after ending its mandate on May 15, 1948.

The creation of Israel and the war that followed allowed Israel to control 78 percent of the area of Palestine and expel 700,000 of its Arab population. The remaining 22 percent were occupied in the June 1967 war.

The Palestinian refugee problem still persists until today and the official number of refugees has risen to four million living in dozens of refugee camps in Palestine, Jordan, Lebanon and Syria.