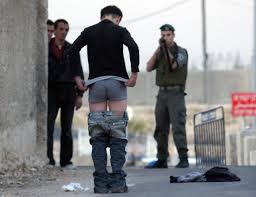 Israeli forces raided Fahma village to the south of Jenin, where they arrested 32  Palestinians after breaking into and ransacking their homes.

Forces, during the raid, fired concussion grenades and tear gas canisters at local residents, triggering clashes with them.

Meanwhile, soldiers stationed at flying military roadblock near Kafrit arrested a Palestinian who is a resident from Ya‘bad, a town located to the southwest of the city.

They also raided Kafr Dhan to the west of the city, where they arrested three Palestinians aged 16 and 17 years after breaking into and extensively searching their families’ homes.

Meanwhile in Hebron district, troops raided Beit Ummar to the north of the city, where they arrested a 16-year-old Palestinian after breaking into and ransacking his family’s home.

The teenager is still being treated for injuries he sustained after being shot by Israeli forces during last August.

Troops also arrested two Palestinians aged 24 and 40 years after breaking into their homes in at Farsh al-Hawa and Wadin al-Samn neighborhoods in Hebron city.

They also raided Abu Iktaila neighborhood in the city, where they broke into several homes and seized equipment from a local stone-cutting factory.