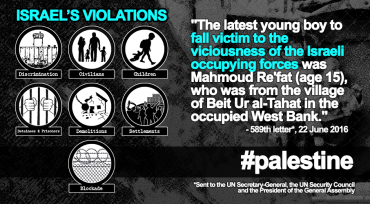 Since our last letter to you, on 16 June 2016, the Palestinian people, including children, have continued to be killed, injured and terrorized as a result of Israel’s ongoing violations of international law, humanitarian law and human rights law throughout the Occupied State of Palestine, including East Jerusalem.    Unprotected, despite the very clear provisions of international law according protection to civilians under foreign occupation, the Palestinian people continue to endure countless human rights violations and war crimes at the hands of the Israeli occupying forces. Tensions have consequently remained high and anger, fear and frustration among our people are rising as the faith that peace can ever be achieved continues to fade more with each passing day.

Each letter that we send to Your Excellency, not only contains a list of just some of the crimes committed by the occupying Power against the Palestinian people and their land, but it tragically contains names and stories of innocent lives that were lost at the hands of the occupation. And with each name and story, a new cycle of hate and anger fester among an occupied people who have been left defenseless against a monstrous occupying Power that unleashes it lethal weaponry against them on a daily basis. No doubt Israel, the occupying Power, has been bolstered by the culture of impunity and lawlessness that continues to prevail due to the failure by the international community to hold Israel accountable for any of its violations and crimes against the Palestinian people and throughout the Occupied Palestinian Territory, including East Jerusalem. Such impunity has not only absolved Israel from its legal obligations as an occupying Power, but has emboldened its continued perpetration of crimes without fear of punishment.

A prime example of the occupying Power’s sheer brutality took place yesterday, 21 June 2016, in which the Palestinian people were faced yet again with immense grief and sorrow by the loss of yet another child lost at the hands of the occupation. The latest young boy to fall victim to the viciousness of the Israeli occupying forces was Mahmoud Ra’fat Badran (age 15) who is from the village of Beit Ur al-Tahta in the occupied West Bank. Mahmoud along with his brothers Amir (age 16) and Hadi (age 17) as well as their friends Daoud Abu Hassan (age 16) and Majd Badran (age 16) were coming back from a visit to the only nearby swimming pool. Their vehicle was en route home on a road close to an Israeli-only bypass road, which is also referred to as “road 443” or the “Apartheid Road.” Suddenly, the car came under heavy gunfire by nearby Israeli occupying forces killing Mahmoud and seriously injuring the other young boys in the car. The Palestinian Red Crescent Society said that Israeli occupying forces prevented paramedics from attending to the injured Palestinian boys for over 90 minutes. Moreover, three of the young boys that were finally treated at the hospital had bullet wounds in the head and chest.

It should be noted that “road 443” is an Israeli-only road which is 15 miles long with more than half of the road cutting through the occupied West Bank. In addition to violating Palestinians’ freedom of movement and access, with devastating repercussions for health, education and livelihoods, such apartheid roads like “road 443” have consolidated and strengthened the presence of illegal Israeli settlements across the occupied West Bank, ensuring superior access for illegal settlers at the expense of the indigenous Palestinian civilian population.

In regards to the tragic killing of Mahmoud, a military spokeswoman of the occupying Power stated that the young boys “mistakenly hit” while Israeli occupying forces were responding to alleged reports that Palestinians were “throwing rocks and firebombs” at illegal settlers on the Israeli-only road mentioned above. The international community must not accept that the occupying Power, who according to the Fourth Geneva Convention has the obligation to protect the occupied people, continues to “mistakenly hit” Palestinian civilians, including children. Even if they were responding to alleged stone throwing, how can that ever justify riddling a car with bullets, shooting people in the head and the chest. How can the occupying Power, who also happens to be a full member of the United Nations, be allowed to conduct itself in such a criminal manner killing, injuring and destroying the lives of so many Palestinians day in and day out? And, how can the international community continue to allow the occupying Power to commit such crimes with complete impunity? The Palestinian leadership calls for an international investigation into this latest crime in order to hold the perpetrators accountable for their crimes and for destroying the lives of yet another Palestinian family. Enough is enough.

Sadly, for the family of Mahmoud, this is not the first tragedy they have faced because of Israel’s 50-year occupation. In fact, Mahmoud’s father, a diplomat with the Ministry of Foreign Affairs of the State of Palestine, was a prisoner of the occupation and was held in an Israeli prison for sixteen years. In addition to that, while he was in prison, his family home was demolished by Israeli occupying forces. And now, the family is mourning the cold-blood murder of their eldest son Mahmoud, whose body still remains with the occupying Power and not returned to his family for a proper burial. At the same time, Mahmoud’s family is at the hospital bedside of their other two sons, praying for their survival as they continue to fight for their lives as a result of head and chest bullet wounds. This is just one example of how lives under occupation are shattered by the policies of occupation.

While it is impossible to record every single crime perpetrated daily by the Israeli occupying forces and terrorist settlers against the Palestinian people, the list below is just some of the many Israeli crimes in the recent period, including, inter alia, home demolitions, mass arrests and detentions, along with its ongoing illegal blockade of the Gaza Strip, all clearly intended to make the lives of Palestinian civilians as miserable as possible and severely affecting every man, woman and child:

Mahmoud Ra’fat Badran (age 15) who is from the village of Beit Ur al-Tahta in the occupied West Bank was killed by Israeli occupying forces. His brothers Amir (age 16) and Hadi (age 17) as well as their friends Daoud Abu Hassan (age 16) and Majd Badran (age 16) who were in the car with Mahmoud also sustained serious injuries by Israeli gunfire and remain in serious condition.

It is without a doubt that the above-mentioned violations are in grave breach of international humanitarian law, as well as international criminal law as articulated in the Rome Statute of the International Criminal Court. For these war crimes, we will continue to seek accountability and justice through all legal and peaceful means. At the same time, we call again on the international community, particularly the Security Council, to act now to protect the Palestinian people and diffuse this dangerous situation, which clearly constitutes a threat to international peace and security. As we have stated in the past, the Palestinian people cannot remain the exception to the responsibility to protect civilians from atrocities and flagrant breaches of the law for they are not just statistics but human beings whose lives are being constantly shattered. Yesterday’s tragic event can only provide more evidence of the occupying Power’s total disregard for the lives and rights of the Palestinian people as well as its total contempt for international law. The time is now for the international community to finally bring an end to Israel’s impunity and to bring an end to Israel’s 50-year occupation in order to bring overdue justice to the Palestinian people.

This letter is in follow-up to our 588 previous letters regarding the ongoing crisis in the Occupied Palestinian Territory, including East Jerusalem, which constitutes the territory of the State of Palestine.  These letters, dated from 29 September 2000 (A/55/432-S/2000/921) to 16 June 2016 (A/ES-10/xxx-S/2016/xxx) constitute a basic record of the crimes being committed by Israel, the occupying Power, against the Palestinian people since September 2000.  For all of these war crimes, acts of State terrorism and systematic human rights violations being committed against the Palestinian people, Israel, the occupying Power, must be held accountable and the perpetrators be brought to justice.

I should be grateful if you would arrange to have the text of the present letter distributed as a document of the tenth emergency special session of the General Assembly, under agenda item 5, and of the Security Council.

Please accept, Excellency, the assurances of my highest consideration.

Ambassador, Permanent Observer of the State of Palestine to the United Nations