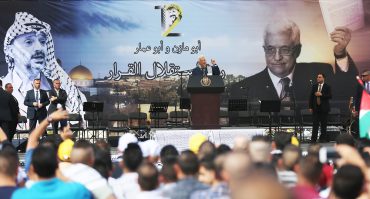 RAMALLAH, November 10, 2016 (WAFA) – President Mahmoud Abbas said Thursday that the year 2017 is going to be the year to end the Israeli occupation.

Addressing thousands of people who gathered at the Muqata, the presidential headquarters in Ramallah, to commemorate the 12th anniversary for the death of the Palestinian leader Yasser Arafat, Abbas said that “this is not a wish, but with work, with struggle, with all means available we tell the world, enough, the year 2017 should be the year to end the occupation.”

Abbas said that even though Arafat is dead, he still lives among his people in his soul.

“We have lost a body, but his soul still lives with us,” he said.

Arafat died on November 11, 2004 after a sudden illness following months of being under Israeli military siege in the Muqata. He was flown to France for treatment, where he died in yet unclear circumstances.

International forensic experts who did tests on samples extracted later from Arafat remains said he died of the highly poisonous polonium radioactive material, and Israel is believed responsible for assassinating him.

Abbas said that investigation into Arafat’s death was still ongoing, calling on the special committee set up to determine the causes and people behind his death to continue in its work until it finds the truth about his death.

The Palestinian leader said he will ask the United Nations Security Council for full UN membership for Palestine.

Palestine first applied for full membership in 2011 but it failed to get its application considered. The next year, Palestine was accepted as a non-member observer state, giving it the right to join all UN organizations and act as a full member but without voting rights.

Abbas also said that the Palestine will go to the Security Council to ask for a resolution demanding end to Israeli settlements in the occupied Palestinian territories, which he said “pose a real threat to chances of peace.” He said all settlements built since 1967 are illegal and they all should be removed.

He said that as the Palestinian people mark 99 years for what he described as “the despicable and unjust” Balfour Declaration of November 2, 2017, when then British foreign secretary Arthur Balfour “gave what is not his to those who do not deserve it,” as Abbas said, they will not give up on their claim for justice and apology from Britain.

Balfour promised world Jews a national homeland in Palestine totally ignoring its indigenous Palestinian Arab population who has been living there for centuries.

“This issue was emerged few months ago and it will continue,” he said in his demand for a British remedy of its act.

Abbas the night before inaugurated the Yasser Arafat Museum, which tells the history of the Palestinian struggle through Arafat’s life span since early last century until Arafat’s death in 2004.

The museum, which was opened for the public after the rally, includes the rooms Arafat had spent the last months in his life while under Israeli siege.