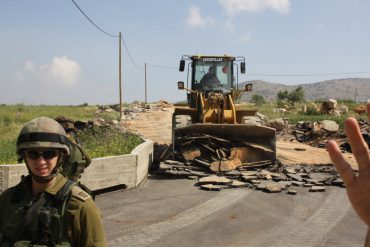 JORDAN VALLEY, October 13, 2016 (WAFA) – Israeli forces on Thursday destroyed a local road leading to the village of al-Hadidiya  in the northern Jordan Valley, according to a local source.

Mutaz Bsharat, who monitors settlement activities in the Jordan Valley, told WAFA that an army bulldozer accompanied by a military escort destroyed the road.

The village has been subject to repeated Israeli violations, including demolition of homes and agricultural facilities in order to force residents to leave it.

The village is in Area C, which makes around 60 percent of the total area of the West Bank. Israel controls this area and wants to empty it from its Palestinian residents in order to annex it.