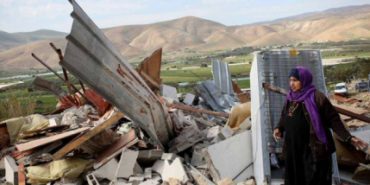 TUBAS, November 16, 2016 (WAFA) – Israeli forces ordered 16 families in Hamsa al-Fawqa area in the occupied West Bank district of Tubas, in the Jordan Valley, to evacuate their homes on Thursday to make way for Israeli military exercises in the area, local activist Mutaz Bsharat said on Wednesday.

He said Israeli forces told the 16 families, which make up 85 individuals, that they need to leave their homes from 6:00 in the morning until midday, the time the army is planning to do its exercise.

Palestinian residents of the Jordan Valley regularly face evacuation to Israeli military exercises on or near their land.  They say Israel is trying to push them out of their land to eventually take it over to build Jewish settlements.

Many Palestinians in the Jordan Valley see military exercises in firing zones as well as repeated house demolitions as an Israeli strategy to empty the land of Palestinians and confiscate it for further settlement expansion and agricultural production.