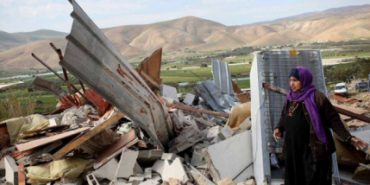 Mutaz Bisharat, who monitors Israeli violations in Jordan Valley, said the so called Israeli Civil Administration notified nine families in the village that they have to leave their homes at 4:00 p.m. on November 1 until 11:00 a.m. the next day.

Israeli army conducts military training in areas inhabited by Palestinian Bedouins on regular bases forcing many to leave their homes for few days each time.

Palestinians believe the military exercises are part of a larger Israeli scheme to empty the land of its Arab inhabitants for further settlement expansion.

In May 2014, a senior Israeli army officer admitted that military live fire training in the West Bank “is used as a way of reducing the number of Palestinians living nearby, and serves as an important part of the campaign against Palestinian illegal construction.”

According to B’Tselem, an Israeli human rights group, Israeli military training in the Jordan Valley “cause unreasonable disruption to the lives of the communities in the area.”