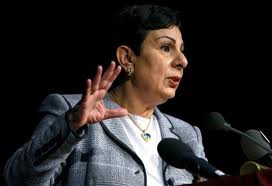 They both met Tuesday with the international diplomatic corps to Palestine, including consuls and representatives to the State of Palestine at the PLO headquarters in Ramallah and addressed the crisis in Gaza and the ongoing Israeli assault in the context of internal, regional and global political developments.

Both Abed Rabbo and Ashrawi insisted that the Egyptian proposal is a necessary first step that must be developed, not only to end the blockade, but to ensure Israeli compliance with international law and the requirements for peace:

“This is a game changer and the Palestinians will not go back to the status quo ante.  The international community is called upon to take its responsibilities seriously to implement international law and to develop the political will necessary to curb Israeli war crimes and to end the occupation.”

Ashrawi told the diplomats, “We are committed to national reconciliation, beginning with a meeting of the temporary leadership framework to be hosted by the Arab League in Cairo.”

Abed Rabbo stressed, ‘Lifting the illegal and immoral siege and reaching a ceasefire are not mutually exclusive objectives.  Without ending the blockade on Gaza and its people, there will never be peace and stability.”

He also said: ‘Hamas and Islamic Jihad conditions for accepting a ceasefire represent the collective Palestinian will and the national consensus.  They must be met if we want to prevent the recurrence of such Israeli attacks in Gaza.”

In the meeting, Ashrawi stressed that ‘Israel’s war is not a war of self-defense; it is a war being waged against a captive, defenseless population under occupation.  Israel’s military assault on Gaza constitutes an act of state terror and a deliberate war crime; this is the outcome of Israeli impunity in the same way as the Israeli settlement activities in the West Bank and the illegal annexation of Jerusalem constitute another aspect of Israel’s aggression and impunity.”

‘It has become a matter of the utmost urgency for the world to act now to put an end to the annihilation of entire families and neighborhoods in Gaza.  All this has to be done in a legal and political context, not only to put an end to Israeli attacks, but also to deal with the real causes of such policies and measures.”