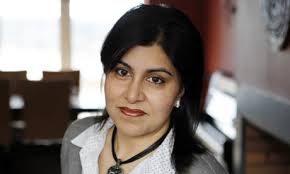 LONDON, August 5, 2014 (WAFA) – Baroness Sayeeda Warsi resigned from her position as a senior minister in Britain’s Foreign Office on Tuesday, saying “she could no longer support the government’s policy on the conflict between Israel and Hamas,” Tuesday reported the Reuters News Agency and other media sources.

“Warsi, a baroness who sits in Britain’s upper house of parliament, became Britain’s first Muslim to serve in Cabinet in 2010 but was later demoted to be a senior minister of state at the Foreign Office and a minister for faith and communities,” reported Reuters.

“With deep regret I have this morning written to the Prime Minister and tendered my resignation. I can no longer support Govt policy on #Gaza,” said 43-year-old Warsi on her official Twitter feed.

“My view has been that our policy in relation to the Middle East Peace Process generally, but more recently our approach and language during the current crisis in Gaza is morally indefensible,” quoted Aljazeera website.

“While the British government has repeatedly called for an immediate ceasefire in Gaza, Prime Minister David Cameron has come under criticism from the opposition Labour party for refusing to describe Israel’s actions as disproportionate,” said Reuters.