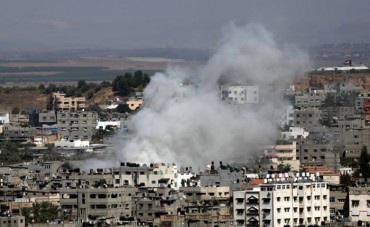 GAZA, July 31, 2014 (WAFA) – At least 1375 Palestinians have been killed, most of whom are women and children, while more than 7700 others have been injured since the beginning of the Israeli ongoing aggression on Gaza on July 8, according to medical statistics.

As Thursday marks the 24th day since the aggression began, a least 13 Palestinians, including a child, a disabled female and a journalist, were killed in a series of Israeli air and artillery attacks across the Gaza Strip, said WAFA correspondent.

The recent attacks follow a bloody day in which at least 129 Palestinians were massacred and 350 were injured in a series of Israeli artillery and air attacks across the Gaza Strip.

Journalist Sameh al-Aryan, of al-Aqsa TV, died Thursday of his wound which he had sustained in an Israeli bombing which hit the marketplace of Shujaeya district, east of Gaza City, on Wednesday.

The Israeli massacre in Shujaeya claimed the lives of almost 18 innocent Palestinians, including journalists, medics and other staff affiliated with the International Red Cross and others with the Palestinian Red Crescent, in addition to children, women and elderly.

Five Palestinians were Thursday killed in an Israeli artillery attack that targeted, with several missiles, a group of people in the town of Abasan, southeast of Khan Younes. They were identified as Naji Abu-Mustafa, Hani Abu-Mustafa, Ashraf Au-Tuaima, disabled Falastenie Abu-Tuaima, and Mohamad Foad Khamis an-Najjar.

Medical sources said also Adham Seyam, a child, died of his wounds, which he had sustained in an Israeli bombing on Rafah, in the southern Gaza Strip, a few days ago.

Meanwhile on Thursday morning, 58-year-old Aref Barakah was killed as an Israeli artillery shell that hit his house located in Deir el-Balah, in central Gaza.

A twenty three year old mother, identified as Maha Abu-Helal, was also killed, whereas her husband and her two children were injured, when an Israeli bombardment targeted her house in al-Jeneneh district in Rafah City in the morning hours.

Meanwhile, 22-year-old Ahmad Loah died of his wounds, which he sustained in an earlier Israeli shelling, while being treated at a hospital.

In the meantime, an Israeli reconnaissance aircraft targeted a motorbike in Khan Younes, claiming the life of Mohammad Fsifis, 32.

Meanwhile on Thursday, an Israeli F16 jet fighter bombed and destroyed a two-storey building in ad-Daraj neighborhood, in Gaza City, turning it into heaps of rubble, yet no casualties were reported.

Israeli artillery also fired 10 missiles targeting an open agricultural area, east of al-Maghazi refugee camp, setting fire to the area where civil defense teams have been unable to reach due to mass shortage of the necessary equipment.

Israeli artillery also bombed the surrounding of al-Awda Mosque in Deir el-Balah with 10 missiles, causing severe damages to nearby homes.

Warplanes further hit a location in Beit Lahiya, to the north of Gaza, yet no injuries were reported.

Medical sources said also a number of Palestinians were injured in an Israeli airstrike that hit a house belonging to al-Helew family in Jabaliya, with no injuries reported.

In the meantime Israeli warplanes hit a house, belonging to Hammouda family, in Beit Lahiya, whereas the house of Abu Hwishil in Bureij refugee camp was also bombed.