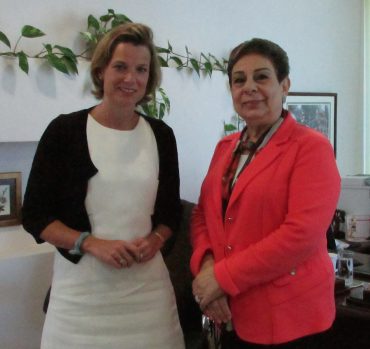 Both parties reviewed the EU position on racism and human rights, including the causes of xenophobia, racism and populism in Europe and beyond, and combating anti-semitism and anti-Muslim hatred.

Dr. Ashrawi discussed the Palestinian question and stressed, “The culture of racism and hate that is generated by the occupation is one of the most destructive expressions of the abnormal conditions on the ground, whereby the Palestinians are languishing under a cruel occupation while Israel enjoys immunity and preferential treatment.  Dealing with the causes of the occupation and respecting international law and international humanitarian law are the keys to peace and to combating violence, extremism and hatred.”

In the context of the European role, Dr. Ashrawi expressed regret for Europe’s preferential treatment of Israel and its lack of accountability for Israel, as well as the erosion of the European policy vis-à-vis Palestine and international law.

She called on the EU to effectively use its own laws and legislation to hold Israel accountable for its persistent violations of international law and Palestinian human rights.