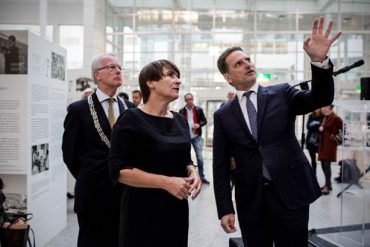 UNRWA Commissioner-General Pierre Krähenbühl (right) attended the opening of ‘The Long Journey’ exhibition at The Hague with the Dutch Minister of Development Cooperation and Foreign Trade, Lilianne Ploumen (centre), and the Mayor of The Hague, Jozias van Aartsen (left), during his two-day mission to the Kingdom of the Netherlands this week. Photo courtesy of Dirk-Jan Visser

JERUSALEM, October 5, 2016 (WAFA) – At the opening event of a photo exhibition in The Hague, Dutch Foreign Trade and Development Cooperation Minister Lilianne Ploumen said the Palestinian people are not just numbers, according to a press release by the United Nations Relief and Works Agency for Palestine Refugees in the Near East (UNRWA) published Wednesday.

UNRWA Commissioner-General Pierre Krähenbühl along with Dutch officials attended on Monday the opening event of ‘The Long Journey’, a travelling exhibition of select photographs from the UNRWA Film and Photo Archive, hosted at the City Hall of The Hague.

The exhibition, attended by Ploumen, The Hague Mayor van Aartsen and Krähenbühl, featured historic images from the UNRWA Film and Photo Archive that illustrate the many challenges Palestine refugees have faced throughout the decades, as well as the ingenuity, courage and steadfastness with which they have responded, according to the release.

“There are now more than 5 million Palestinian refugees, but we are numbed by numbers,” said the Minister Ploumen. “This Exhibition makes us see that the Palestinian people are not numbers. Each of these people has the right not to be left behind.”

The Exhibition will be open to the public at the City Hall Atrium until 28 October.

Over the course of the two day visit, Krähenbühl discussed with high ranking Dutch officials and parliamentarians the current situation facing Palestine refugees in the Agency’s five fields of operations, including those who have been heavily affected by the ongoing conflict in Syria, and the Gaza blockade.

He expressed his gratitude for the continued support of the Kingdom of the Netherlands to UNRWA.

“This visit was a welcome opportunity to bolster our ongoing partnership with the Kingdom of the Netherlands, which has played an important role in enabling UNRWA to deliver critical services to Palestine refugees in the areas of education, health care, relief and social services, and in times of emergencies,” said Krähenbühl upon concluding his visit. “We remain profoundly grateful for the continued support of the government and the people of the Netherlands.”

The Netherlands is among the top 15 donors to UNRWA. In 2015, Dutch contributions to the Agency totaled US$ 21.4 million, including US$ 16.9 million to the Agency’s education, health care and social service programs and US$ 4.3 million to the 2016 Emergency Appeal for the Syria Regional Crisis.

Dutch support to Palestine refugees is also implemented through the European Union’s contributions to the Agency’s program budget, emergency appeals and specific projects. Collectively, the EU and its Member States are the Agency’s largest multilateral donor.