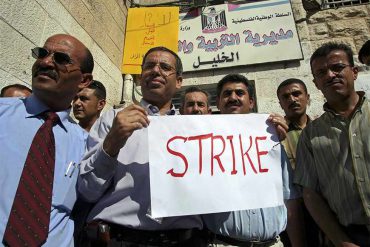 RAMALLAH, October 4, 2016 (WAFA) – The Ministry of Education warned on Tuesday hundreds of public school teachers that they could be dismissed from work if they go on strike over salary issues.

The ministry said in a statement that it will consider deducting any strike day from the salaries and may also resort to dismissing striking teachers and replacing them by teachers who are waiting to get a job in the ministry.

The Palestinian Authority and the Teachers Union reached an agreement in February ending weeks of strike demanding better salaries and guarantee of teachers’ rights.

Some teachers who were not happy with the deal and formed what is known as Teachers’ Movement are calling for strike in schools until the government meets all their demands, particularly those dealing with cost of living increments.