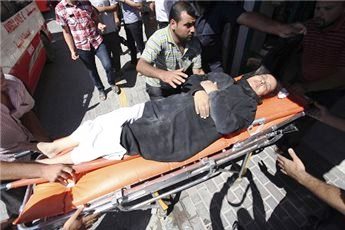 The report featured charts distributing number of victims over the aggression period and the distribution of victims by governorate. It also featured a table about health workers and structures affected up to July 21 (16:00 local time) and listed referrals, immediate needs and urgently needed medical missions.

The report also shows that 5 hospitals and 6 PHC clinics (4 MoH, 2 UNRWA) were damaged, 13 facilities were closed, 4 ambulances were damaged and 23 health personnel were injured. In addition, 3 health personnel; 1 pharmacist, 1 paramedic and 1 medical manager, died after Israeli airstrikes hit sites in their immediate vicinity.

In particular to Al-Aqsa Hospital, the report room showed that the third and fourth floors, housing and emergency department, orthopedics department, surgical department and the intensive care unit (ICU) were all destroyed. Operating theaters had to cease work because of the lack of oxygen.

“The Ministry of Health strongly condemns today’s attacks on health facilities and personnel by the Israeli occupation forces and expresses its deep concern at the serious implications for patients, health personnel and provision of critical medical care,” said the report.

Recalling that attacks against health facilities can be considered war crimes under international law and a clear violation of the Geneva Convention, the Ministry called upon the international community and the UN to take immediate action to prevent further outrages against Gaza citizenry by the Israeli occupation.

The report showed that 41 patients were referred, including 29 patients to Egypt and 12 patients to Jordan.

Regarding immediate needs, the report also showed that there is an urgent need for 71 items of drugs and 20 items of disposals as well as for psycho-tropic drugs, especially emergency drug kits to be used for patients with mental illness who have relapses and families in especially severe circumstances of forced displacement, trauma and anxiety.

It also showed in this regard that there is an urgent need for 8 anesthesia machines, 10 ventilators, 5 electrosurgical units, 20 vital sign monitors, ECG machines, 5 defibrillator machines with a total estimated coast of $742,500.

There is also an urgent need for medical equipments that are available in local market, with an estimated cost of $500,000.

The Ministry of Health and other health partners and humanitarian agencies are working to ensure the provision of essential medicines and medical consumables. The Ministry of Health and WHO issued an appeal to the international community on July 10 for $60 million in order to ensure efficient supplies of medicine, medical supplies and referral care for Palestinian patients, and particularly for the growing needs in Gaza, already overwhelmed by shortages and working under emergency circumstances.

The emergency operation room is responsible for following up on the health situation in Gaza, and has been established in the Ministry of Health in collaboration with WHO and other international and local partners.