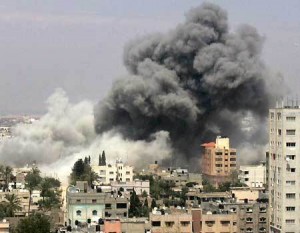 BRUSSELS, July 24, 2014 (WAFA) – The European Union called Wednesday for an immediate ceasefire in Gaza and a halt in the “acts of violence.”

Following the EU foreign ministers meeting on the situation in Gaza and the Middle East, an EU statement condemned the high numbers of civilian casualties in Gaza, stressing that any military action should be taken “proportionately.”

Meanwhile, Irish Minister for Foreign Affairs Charlie Flanagan issued a statement following the meeting during which he stated, “we called on the [Palestinian and Israeli] sides to resume meaningful negotiations with the aim of achieving a comprehensive peace agreement based on a two-state solution to the Israeli-Palestinian conflict based on the 1967 borders,” according to Yahoo News Network.

“We have also discussed the humanitarian aspects of the crisis in Gaza and stressed the need to provide access for humanitarian assistance,” he added.

Minister Flanagan announced on Tuesday an aid fund worth up to €500,000 to provide food, shelter, and medical care to the thousands of families affected by the devastating conflict in Gaza. This aid came in response to a call made by the United Nations’ emergency appeal.