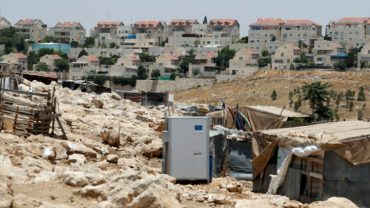 Materials for shelters ‘provided as part of a broader humanitarian intervention’, says letter by eight envoys

Eight ambassadors to Israel have accused the country’s military of contravening international law by removing shelters for Bedouins in the West Bank that were funded by European governments, the Guardian reports.

The envoys leveled the charge in a letter sent privately to Major General Yoav Mordechai, who heads the Ministry of Defense’s governing arm in the West Bank. The signatories – the ambassadors to Israel of Spain, Italy, Switzerland, Belgium, Sweden, Germany, Ireland, and Norway – pointed to two examples this year of shelters funded by EU countries being confiscated.  On May 16, Israel demolished and confiscated “materials for 10 residential caravans in the community of Jabal al Baba, displacing 49 people”,  read the letter.

According to the Guardian, the letter is another sign of increasing disagreement between European governments and Israel regarding aid to Bedouin communities in the West Bank’s Area C, which Israel fully controls security and administration.

A 2014 UN report cited by the newspaper found that some 7,000 Palestinian Bedouins lived in Area C, of which 60 percent were children. The majority of families face demolition orders and over 85 percent have no electricity or running water.

The letter said the confiscated materials were “provided as part of a broader humanitarian intervention for vulnerable Palestinian households” and meant a loss of $64,500 for the governments.

“The people living in the two affected communities are among the most vulnerable in the West Bank,” the newspaper quoted the letter as saying. “These confiscations as well as previous demolitions, compounded by the inability of humanitarian agencies to deliver relief items to the affected households, create a coercive environment that potentially pressures them to leave their current sites against their will.”