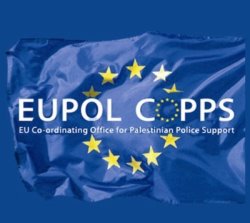 During the three-day workshops in the West Bank city Jericho, EUPOL COPPS anti-narcotics experts delivered lectures to 31 police officers and heads/deputies of PCP/Anti Narcotics Administration of all West Bank areas and 13 District Prosecutors on the International recommendations on how to seize, handle and destroy drugs.

The experts lecturing at the PCP-run Palestinian College for Police Sciences (PCPS) showed the attendees the best international practices in the field of Crime Scene Investigation (CSI) procedures related to securing the area of drug crime scene, seizure of drugs, documenting of crime scene and secure seizure, transport, storage and disposal of drugs.

Based on practical examples, representatives of the police and rosecution discussed the problems relating to the implementation of international standards and their mutual cooperation.

One of the main aims of these workshops was to bring the specialized prosecutors and police exchange ideas on how they could deal with drugs crimes and what could be improved on the daily handling of these cases.

The adoption of common recommendations leading to an improvement of legal framework and technical equipment was made after every workshop.