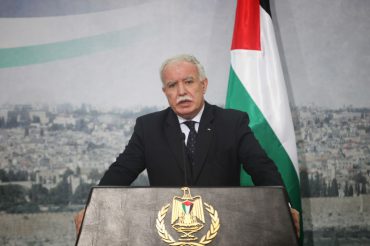 Ban, said Malki in a statement, “chose to join the chorus appeasing the public relations bullying and media spin orchestrated by Israel, the occupying power, which attempts to shift the focus from Israel’s illegal and colonial actions in occupied East Jerusalem to issues irrelevant to the content and objectives of the resolutions adopted by UNESCO.”

Malki added: “This is especially regrettable since the Secretary General is well aware, including through various UN reports, of the dangerous situation in Jerusalem due to the illegal Israeli practices and policies.”

The resolutions adopted by United Nations Educational, Scientific and Cultural Organization concerning occupied Palestine, said the statement, “aims to put an end to Israel’s dangerous and illegal actions against cultural property, including holy sites in Jerusalem, which undermine coexistence and tolerance.  It addresses illegal Israeli practices in occupied East Jerusalem, including violations of the right of Palestinians – Christian and Muslim – to worship and access their holy sites in the occupied capital and elsewhere in Palestine.”

Furthermore, added the statement, “the text of the resolutions clearly reiterates Jerusalem’s character as a city central to the three monotheistic religions.”

Malki said on Ban statement that “willfully choosing to ignore these facts is regrettable and inexcusable.”

Ban said in a statement issued by his office on the Thursday UNESCO vote that “Al Aqsa Mosque/Al-Haram al-Sharif, the sacred shrine of Muslims, is also the Har HaBayit—or Temple Mount—whose Western Wall is the holiest place in Judaism.”

He added: “Any perceived undertaking to repudiate the undeniable common reference for these sites does not serve the interests of peace and will only feed violence and radicalism.”

Malki said in his statement that “Palestine will continue to defend itself through available legal and multilateral fora. We will not be intimidated by PR bullying and efforts to divert attention from Israel’s violations and disregard for international law. Our resolve to protect Palestine’s heritage, as a bastion of tolerance and coexistence, is unwavering and we appreciate the principled support of states, who stand up to these fallacious campaigns and stand tall in defense of international law and the rights enshrined therein.”