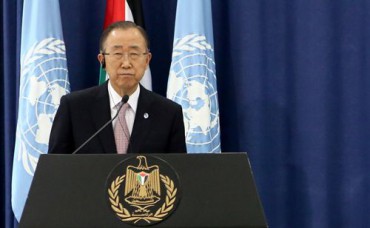 The ministry said in a press statement that Ban’s comments shed light on a growing Palestinian frustration of a half century of Israeli occupation, criticizing key Israeli policies of settlement construction and casting doubt over Israel’s commitment to the two-state solution.

Speaking at a day-long discussion of the Middle East conflict, Ban condemned the series of Palestinian attacks, but said Israeli security measures “alone will not stop the violence” and “cannot address the profound sense of alienation and despair driving some Palestinians – especially young people.”

“As oppressed peoples have demonstrated throughout the ages, it is human nature to react to occupation, which often serves as a potent incubator of hate and extremism,” he added.

Highlighting the detrimental effects Israeli key policies have on the two-state solution, the UN’s top official said: “So-called facts on the ground in the occupied West Bank are steadily chipping away the viability of a Palestinian state and the ability of Palestinian people to live in dignity.”

“Continued settlement activities are an affront to the Palestinian people and to the international community. They rightly raise fundamental questions about Israel’s commitment to a two-state solution,” he added.

The ministry highlighted the positions of states that signaled support for the establishment of the independent Palestinian state, called for the Israeli occupation to be ended and slammed the ongoing settlement construction as “illegitimate and a key obstacle to the two-state solution and restarting talks.”

The ministry slammed the remarks made by Israeli Ambassador Danny Danon, describing them as expressing a “dissonant voice”.

It stated that Danon attempted “to justify and cover up Israeli occupation crimes” against the Palestinian people and expressed “the insistence of Israel, the occupying power, to isolate itself from international consensus.”

The ministry called upon the international community to internationally adopt a binding mechanism that would bring the Israeli occupation within a timetable and ensure settlement construction is halted and Palestinians are immediately provided with international protection.

In his speech, Ban drew attention to media reports that Israel’s so-called Civil Administration has approved 153 new settler units in West Bank settlements and announced that it would seize and declare 1,500 dunums of Palestinian land as “state land” south of Jericho.

Ban described the decisions as “provocative acts bound to increase the growth of settler populations, further heighten tensions and undermine any prospects for a political road ahead.”

“Progress towards peace requires a freeze of Israel’s settlement enterprise. They rightly raise fundamental questions about Israel’s commitment to a two-state solution,” he added.

He stressed that Israel must change its policies, particularly with regards to allowing Palestinian development of Israeli-controlled Area C, which comprises 61 percent of the West Bank and is home to 300,000 Palestinians.

Ban voiced criticism of Israel’s demolitions of Palestinian houses and highlighted the “decades-long difficulties” faced by Palestinians to obtain building permits as well as the forcible transfer of Palestinian Bedouin communities in Jerusalem district.

Saying that the Bedouin community, in particular, is paying a heavy price, he reiterated the UN’s “call for an immediate end to Israeli plans to forcibly transfer Bedouin communities currently living within the occupied Palestinian territory in the Jerusalem area.”

The UN’s top official spoke about the “perilous” humanitarian situation in Gaza and condemned continuing rocket firing into Israel and called on Palestinians to reconcile and reunite the West Bank and Gaza under a single legitimate Palestinian authority.

“Healing Palestinian divisions is also critical so that Palestinians can instead focus their energies on establishing a stable state as part of a negotiated two-state solution,” he said.

Ban called on international donors to fulfill their pledges from the Cairo Conference in order to address the “funding shortages [which] have slowed the pace of reconstruction.”

He also called on the international community to respond “generously” to UNRWA’s recent appeal to collect $400 million to support vulnerable Palestinian refugees and show commitment to “actively help Palestinians and Israelis to rebuild trust and achieve an enduring peace before it is too late.”

Ban warned that without a lasting agreement, the region could be gripped by further violence, the possible financial collapse of the Palestinian Authority, ever greater isolation of the Israeli government, another terrible war and deterioration of humanitarian conditions in Gaza and “a creeping moral blindness.”