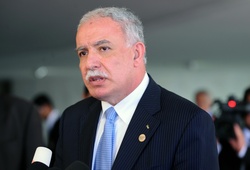 RAMALLAH, August 27, 2014 – (WAFA) – Foreign Minister Riad al-Malki called Wednesday to investigate the possible involvement of foreign volunteers, who serve in the Israeli occupation army and took part in the latest Israeli aggression on Gaza, in the perpetration of war crimes.

Al-Malki wrote to UN Secretary-General Bani Ki-moon and to the governments of other states, urging them to assume their responsibilities and reminding them of their obligations with regard to implementing the international humanitarian law, human rights law, four Geneva Conventions along with their protocols.

In his letter, Al-Malki pointed out that after cooperating with human rights organizations, it has become apparent that foreign nationals have served in the Israeli occupation army, participated in the recent military aggression and committed war crimes in Gaza Strip, urging these states to prosecute their nationals conscripted in the Israeli army and hold them accountable.

Thousands of soldiers with dual nationality are conscripted in the Israeli occupation army under the Machal and Sar-El programs. The Mahal program enables young Jews aged 18 to 24 years from around the world who don’t have Israeli citizenship to volunteer for the Israeli occupation army. They serve in full combat and support roles for one-and-a-half years in order to get temporary residency status.

Sar-El is a program jointly implemented by the Jewish Agency and the Israeli occupation army. It enables Jewish volunteers from around the world to volunteer on Israeli army basis for a period of one week to one month.

Al-Malki demanded in his letter that foreign states identify their nationals serving in the Israeli occupation army, including those serving under Machal and Sar-El programs and notify them of Israeli war crimes and violations of international law committed during the recent aggression on Gaza as well as of criminal liability that they might bear for that.

Al-Malki urged these states to hold an investigation into crimes committed by their nationals and prosecute them within their jurisdiction and urged them to investigate in allegations that their nationals were involved in the commission and abetting of war crimes during the recent Israeli onslaught on Gaza Strip, and prosecuting these individuals where appropriate.

Al-Malki urged for promptly convening the high contracting parties to the four Geneva Conventions in order to oblige Israel to implement these conventions on the Occupied Palestinian Territories and to fully respect them.

He concluded that his ministry would seek to prosecute all those who participated in the last onslaught and committed war crimes against the Palestinian people and would press charges and indict Israel.