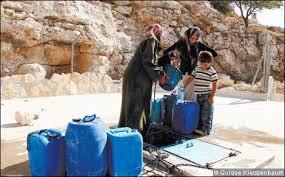 RAMALLAH, September 21, 2014 (WAFA) – Ministry of Foreign Affairs condemned, in a statement Sunday, the “Israeli war” on the Palestinian water resources in the West Bank, which it said aims at undermining the Palestinian presence in Area C, under full Israeli control.

“The Israeli authorities practice this policy while the whole world is watching; a policy which is primarily based on seizing Palestinian water resources, depriving the Palestinian people of their water rights, and transforming [water] into an issue of political blackmail,” the statement said.

“These practices are done through preventing Palestinians from digging artesian wells, seizing and Judaizing of land with underground water reservoirs, and closure of agricultural land through first declaring it a closed military zone, and second denying owners access unless through special permits, which are difficult to obtain and are rarely issued” the statement added.

Several Palestinian artesian wells have recently been closed by the Israeli authorities, which the ministry said it is following up on with keen interest.

The ministry said that such Israeli actions require a serious stand through determining the necessary mechanisms to face these Israeli measures, particularly in light of the absence of effective mechanisms, allowed by Israel, to deal with such actions.