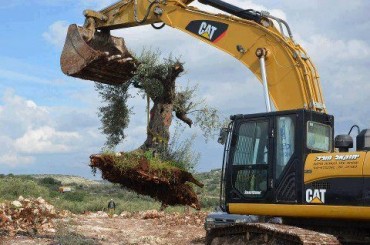 JERUSALEM, September 29, 2014 (WAFA) – Israeli forces on Monday demolished parts of a Palestinian-owned 5-storey building in Abu Dis, east of Jerusalem, provoking confrontations with angry local residents and injuring many of them with live bullets, reported witnesses.

At predawn Monday, an Israeli Police unit backed by heavy machinery cordoned off and imposed a curfew in an area in Abu Dis before embarking on demolishing parts of the ‘Palace’ building, while sabotaging with the rest of the building, making unfit for living, under the pretext of being too close to the separation wall between the West Bank and Occupied East Jerusalem.

Residents of the 5-storey building said Israeli police officers entered the building in a provocative and surprising manner, ordering the inhabitants to leave it within only five minutes. They were also asked not to accompany any of their belongings with the exception of important documents.

The Israeli offensive provoked clashes with angry local residents, where the Israeli soldiers and police officers fired live and rubber-coated bullets towards the protesters, injuring many of them predominantly in the abdomen and the lower side of their bodies. The injured were transferred to hospital for medical treatment.

Local activists reported to ‘hysteric’ and indiscriminate shooting of live bullets by the Israeli forces, noting that the demolition process of the building lasted for 4 consecutive hours.