There are more than 500 Palestinian prisoners being held under administrative detention, a controversial Israeli practice that allows detention of Palestinians without charge or trial for up to sex-month intervals that can be renewed indefinitely.

Israeli officials claim the practice is an essential tool in preventing attacks and protecting sensitive intelligence, but it has been strongly criticized by the international community as well as by both Israeli and Palestinian rights groups.

Palestinian detainees have continuously resorted to open-ended hunger strikes as a way to protest their illegal administrative detention and to demand an end to this policy, which violates international law.

Following are the names of the 34 detainees who received administrative detention orders: 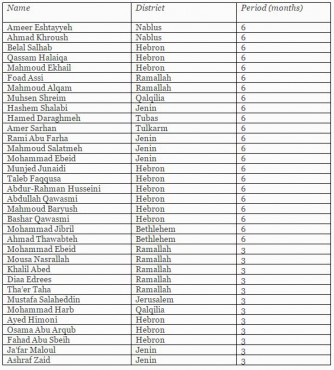