RAMALLAH, December 29, 2015 (WAFA) – The Israeli authorities Tuesday issued administrative detention orders, without charge or trial, against 53 Palestinians, according to the Commission of Prisoners’ Affairs (CPA).

Administrative detention is implemented solely on the basis of an administrative order, without indictment or trial. Under certain circumstances, this type of detention may be lawful.

However, international law stipulates that it may be exercised only in very exceptional cases – and then only as a last possible resort, when there are no other means available to prevent the danger, according to B’Tselem, an Israeli human rights group.

Nevertheless, Israeli authorities routinely employ administrative detention. Over the years, thousands of Palestinians have been held in Israeli custody as administrative detainees for extended periods of time.

“Israel’s use of administrative detention blatantly violates the restrictions of international law. Israel carries it out in a highly classified manner that denies detainees the possibility of mounting a proper defense,” says B’Tselem.

“Moreover, the detention has no upper time limit. Over the years, Israel has placed thousands of Palestinians in administrative detention for prolonged periods of time, without trying them, without informing them of the charges against them, and without allowing them or their counsel to examine the evidence.”

“In this way, the military judicial system ignores the right to freedom and due process, the right of defendants to state their case, and the presumption of innocence, all of which are protections clearly enshrined in both Israeli and international law.”

Following are the names of the 53 detainees who received administrative orders: 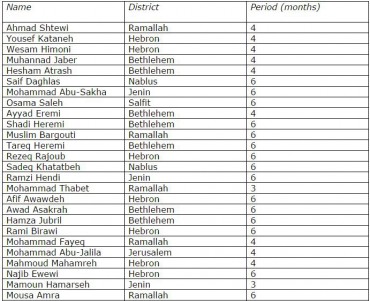 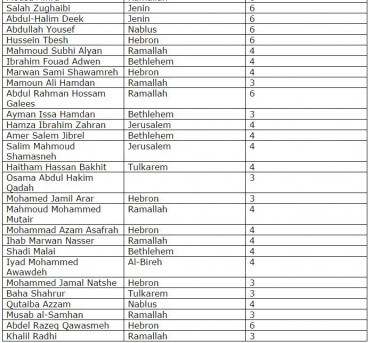