Geneva-Euro-Mid Observer for Human Rights expresses great concern regarding the “knock on the roof” practice, in which Israeli forces fire a light missile on the roof of the home as a “warning”, before firing another missile in less than a minute which destroys the home completely. These warning have been reported to be lethal, as causalities have been reported including injuries. Additionally, not enough time is provided for civilians to evacuate properly.

Hundreds of Palestinian citizens have received warnings from the Israeli Occupation Forces in several areas in the Gaza Strip ordering them to evacuate their homes as Israeli forces were about to bomb them. Israeli forces claim that neighborhoods surrounding these homes are used by the Palestinian resistance to fire rockets at Israel. However Israel has not provided evidence that justifies its claims. Moreover, holding civilians accountable for an act they did not commit amounts to collective punishment, which is a war crime under International law.

Euro-mid cites that Israeli Forces have been targeting civilian homes in the Gaza Strip for six days in a wide range exceeding military necessities and using excessive force.

Euro-mid Observer, based in Geneva, added in a press release on Sunday 13 July 2014 that the areas which Israel have commanded to immediately evacuate are very large; from the east of Attatrah to Salatin Street and the entire west and north areas of Jabalia Camp, which are highly populated. Approximately 300,000 people live in this area. This makes targeting them in such way unjustified and does not take into account “the principle of proportionality” between the anticipated military advantage and the destruction of civilians’ properties and livelihoods.

Additionally, Israeli air strikes have targeted civilian homes in the Gaza Strip and demolishing them completely for being the family homes of “Hamas members”. However, in most cases no evidence has emerged that indicates that the alleged “Hamas operative” was inside the homes at the time of the attack. Israel claims that these homes are being used to store munitions or for military purposes, however in most cases, women and children and elderly were among the deaths.

Deliberately attacking civilian homes constitutes a war crime and also amounts to collective punishment against the families. The strike on the home of Al-Batsh family on July 13 in Gaza city was the deadliest family massacre since Israel launched its offence. The strike killed 18 members and completely destroyed the family home, while the “Hamas operative” that Israel was after, was not killed in the attack.

Euro-mid mentioned that UN agency UNRWA has opened 8 schools so far to accommodate at least 17,000 displaced in the northern Gaza Strip as they fled their homes at dawn.

Israel in its attacks on civilian homes has proved to have no respect to human lives in the Gaza Strip. The Israeli Occupying Force breached laws of armed conflict by attacking indiscriminately civilians in at least several incidents, by targeting civilian and protected facilities, by failing to provide unquestionably effective warning to civilians at risk and by failing to implement rules of international humanitarian law regarding military occupation.

The pattern of Israeli attacks and the high number of civilian casualties show elements of reckless conduct, disregard for civilian lives and property and a consistent failure to distinguish between military targets and civilians and civilian objects.

Euro-Mid Observer urges the Israeli occupying forces to immediately stop the targeting of the Palestinian civilians homes and to exclude civilians as much as possible from the from the terror of the Israeli assault on Gaza. The Euro-mid Observer is stressing the need of an immediate cease-fire between the conflicting parties. 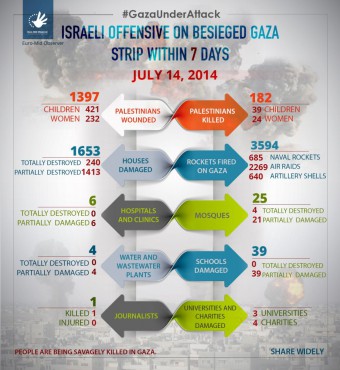