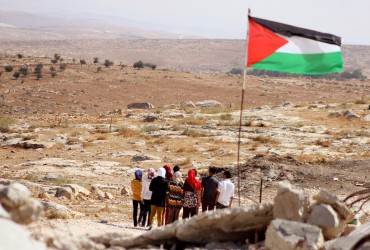 WAFA reported on the coordinator of the Popular Committee against the Wall and Settlements, Ratib al-Jabour saying Israeli soldiers conducted military drills in the Palestinian Masafer Yatta area, especially in the Jinba, Mirkez and Halaweh communities.

Deployed around the Palestinian communities to conduct the drills, hundreds of soldiers occupied the land in front of the nearby Israeli military base; pitching up tents, digging trenches and unloading military equipment.

The communities’ freedom of movement was severely restricted, the fields were damaged by military activities, and shepherds were chased away with their flocks, said Jabour.

More than 1,300 Palestinians have been living in Masaffer Yatta since before the Israeli occupation of the West Bank in 1967. Palestinians in this area face a continuous risk of forcible expulsion.

The Jinba, Mirkez and Halaweh are among 14 communities of Masafer Yatta area that has been designated by Israel as a closed military zone for training since the 80s. The area has been labeled as Firing Zone 918.

“Subsequently, these communities have been subject to a range of policies and practices that have undermined their physical security, lowered their standard of living, and increased their poverty levels and dependence on humanitarian aid. The communities are at a continuous risk of forcible transfer out of the area,” said the UN Office for Coordination of Humanitarian Affairs in Occupied Palestinian Territories (OCHA).

According to OCHA, families in two other communities in the area – al-Kharoubeh and Khirbet Sarura – have already been forced to leave their homes as a result of settlement activities, including settlers’ violence.

Like many other Palestinian communities located in Area C, which is under full Israeli military and administrative control, Palestinians living in Masafer Yatta are particularly vulnerable and food insecure.

“They rely on livestock, mostly sheep and goats, as their primary source of income. Some families are unable to support their livestock since access to grazing areas is restricted due to the threat of settler violence or by the Israeli military, and thus have reduced income with which to meet their own needs, increasing their levels of poverty. All of the communities located in the Firing Zone are dependent upon food assistance from humanitarian organizations.”