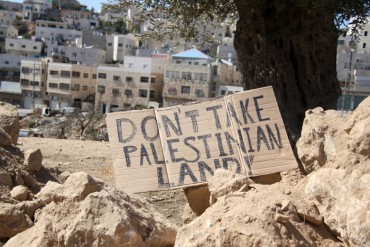 Yabad Mayor Samer Abu Baker told WAFA Israeli soldiers entered agricultural land near the illegal settlement of Mevo Dothan, which was built by force on the town’s land and placed several confiscation orders for the owners.

The orders stated the land has been deemed a closed military zone and the owners are not allowed access.

He said Israeli forces not only seized the land, but also shut down road 585, which connects the city of Jenin and the town Yabad, Bartaa and the city of Tulkram. They also set up a 900-meter-long metal fence 100 meters into Yabad’s land.

“The soldiers deployed in the area are constantly trying to drag the people of Yabad into trouble by making false accusations of plotting attacks,” he said.

Mohammad Saeed Nassar Abu Baker filed an official complaint at the Palestinian liaison office about Israeli soldiers’ attempts to plant a sharp tool in his car to accuse him of attempting to stab them.

He said the driver Ahmad Abu Shamla and him were pulled over for an hour and interrogated about youth who throw stones. Abu Baker said the sharp device was planted then in his car.