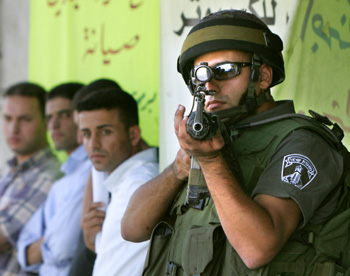 In Hebron district, Israeli forces raided Al-‘Arroub and Al-Fawwar refugee camp, where they arrested three Palestinians aged 20, 21, and 27 years after breaking into and ransacking their homes.

They also raided Beit Ummar, where they broke into and ransacked several homes before arresting two freed prisoners Palestinians, aged 18 and 19 years, according to Mohammad ‘Awad, who coordinates the Anti-Wall and Settlement Popular Committee in the village.

They also raided several neighborhoods in Hebron city and set up roadblocks at the entrances of Sa‘ir, Halhul, Al-Fawwar junction and the northern entrance of Hebron, where they stopped Palestinian-registered vehicles traveling along the way and examined passengers’ ID cards.

Meanwhile in Bethlehem, Israeli troops raided Husan, to the west of the city, where they arrested a 20-year-old Palestinian.

They also raided Taqou‘, to the east of the city, where they handed a 50-year-old Palestinian a notice to appear before the Israeli intelligence for interrogation after breaking into and ransacking his home.

In the meantime in Jenin, forces raided Silat Ad-Dhar, where they arrested two Palestinians aged 17 and 20 years, according to Palestinian Prisoner Society.

Meanwhile in Jerusalem, Israeli police and intelligence officers raided a home in the old city, where they seized mobile phones and PCs before arresting a Palestinian.