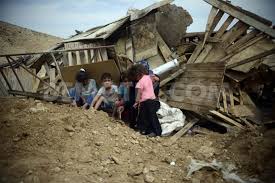 Israeli military bulldozers, escorted by large troops, raided Jaba‘, where they demolished the structures, including a structure housing a family consisting of nine members, as well as destroyed large quantity of fodder, causing damages that accounted for over ILS 20,000 (about $5,600), according to Jum‘ah Suleiman al-Ma‘azi.

According to the the Jaba‘ Village Profile published by the Applied Research Institute of Jerusalem (ARIJ), Jaba‘ has a total area of 13,624 dunums. A total area of 1,758 has been seized from the Palestinian locals for the construction of illegal Israeli settlements, outposts, bypass roads, and military bases and to construct part of the wall.

According to ARIJ, the Israeli government seized 1,684 dunums (13% of the total village area) to establish the illegal settlements of Giva’ BenYamin (Adam) and Shi’ar BenYamin, which are located to the southeast and north of the village respectively.

Eighteen Palestinian families have been living in the area since the seventies before the establishment of the settlements which are encroaching steadily on their lands. They have been earning their living from livestock production and cultivation.

The Palestinian locals have been frequently denied access to their land and pastures by Israeli settlers; targeting locals through eviction and demolition of structures for the benefit of settlement construction and the annexation of the village land.