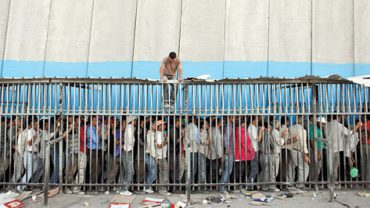 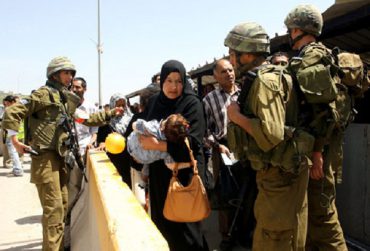 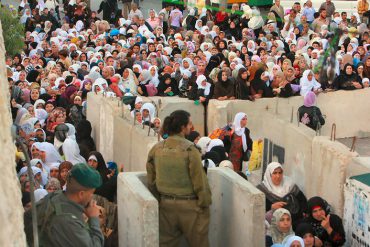 Karim Ajweh, an attorney representing the Detainees and Ex-Detainees Committee, said a number of detainees held in Askalan prison complained about preventing their families from visiting them despite being granted entry permits.

Ajweh added Israeli troops turned away the families of a number of detainees after tearing their permits purportedly for being denied entry by Israeli intelligence.

Detainees and Ex-Detainees Committee called upon the International Committee of the Red Cross (ICRC) to assume its responsibilities and intervene to halt these Israeli practices that violate all humanitarian laws and norms.

According to a report by Prisoner Support and Human Rights Association, a local human rights organization,following the Israeli re-invasion of the West Bank and the resulting imposition of movement restrictions, all Palestinian families from the occupied territory who wish to visit a family member detained in Israel – with the exception of Jerusalem ID holders – must now receive an entry permit into Israel.

The application process for entry permits is lengthy and can take between one and three months, while the permit itself is valid for only one year. The application is submitted via the International Committee of the Red Cross (ICRC) and then transferred to the Israeli authorities.

Visits to Palestinian prisoners and detainees are restricted to first-degree relatives – children, spouses, parents, siblings and grandparents only, thus isolating the detainee from his or her social and professional environment. Men between the ages of 16 and 35 are typically prevented from visiting prisons inside Israel and receive the special entry permits only once a year if they are the brother of the detainee and biannually if they are the son of the detainee. Furthermore, in practice hundreds of families fail to receive permits at all, based on undisclosed “security grounds”.

Israeli authorities never provide any justification for the rejection of a permit application apart from the standard phrase: “forbidden entry into Israel for security reasons”. In many cases only old and young relatives – children under the age of 16 who do not require permits – are able to visit relatives detained in Israel. As a result, thousands of Palestinian prisoners serve their entire sentences without receiving regular family visits.

For Palestinian families who visit relatives detained inside Israel, the journey from home to prison depends on the family’s residence and on the type of ID they hold. For most West Bank residents, the round-trip journey takes anywhere from eight to 15 hours depending on their place of residence – village or city – the number of checkpoints they must cross and the location of the prison, i.e. in the northern, central or southern regions of Israel.

In many cases, the journey involves waking up as early as 4 or 5 a.m., taking public transportation to the ICRC meeting point in a governorate city and then taking the ICRC bus to the nearest Green Line crossing. During this first part of the journey, visitors are subjected to random searches at checkpoints and multiple ID checks. Once they arrive at the Green Line crossing, family members are forced to walk through between seven and 10 sets of revolving doors and are subjected to lengthy body searches.

The family’s bags are emptied and searched in separate rooms. This process can last around two hours. Afterwards, families are directed to Israeli-registered ICRC buses waiting on the other side of the Green Line. Escorted by police vehicles, the buses continue their journey to the prisons housing Palestinian prisoners and detainees. Upon arrival at the prison door, family members are routinely subjected to body searches. On occasion, they are also subjected to humiliating strip searches.

Frequently, families of prisoners and detainees report being turned away from a Green Line checkpoint despite holding a valid permit authorizing them to enter Israel on a prison visit. In addition, prisoners are often transferred to different detention facilities just before a scheduled family visit. Such transfers are rarely communicated beforehand to the families, who then make the long journey only to find out that their visit had been cancelled.