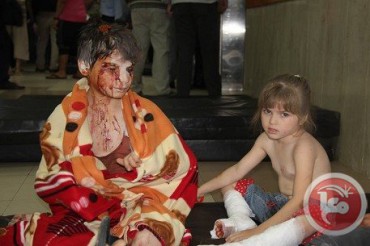 GAZA CITY (Ma’an) – On the 13th day of the ongoing military offensive against the Gaza Strip, residents say invading Israeli forces committed “a new massacre” in the Shujaiyya neighborhood of Gaza City. At least 66 people have been killed and hundreds have been injured in the Eastern neighborhood, medics said Sunday.

The death toll is expected to rise as more bodies are uncovered, while the day’s total across the Gaza Strip has surpassed 90 brining the 13-th total death toll to more than 410, with at least 3,000 injured.

Medical sources said more than seven Palestinians were killed in other areas across the coastal enclave. Spokesman for the Palestinian Ministry of Health Ashraf al-Qidra said rescue teams evacuated 50 dead bodies from destroyed houses including 17 children, 14 women and four elderly people. More than 200 injured people were taken to al-Shifa hospital-

Palestinian medical sources in al-Shifa Hospital told Ma’an that the hospital was unable to cope with the large numbers of residents who fled their homes in Shujaiyya “under fire” to the hospital for shelter. They highlighted that Sunday’s death toll hit 20 since midnight.

Palestinian Ministry of Health spokesman Ashraf al-Qidra said that among Shujaiyya’s victims were family members of senior Hamas leader Khalil al-Hayya. He identified them as Osamah Khalil al-Hayya, his wife Halah, and his sons Khalil and Umamah.

Al-Qidra highlighted that the last few hours were the “fiercest” against Palestinian houses. Residents, he said, have been appealing for help since midnight saying that large numbers of people have been killed or injured in the houses as shells continued to hit them from all directions.

Al-Qidra highlighted that Israeli forces denied ambulances access to attacked houses to evacuate victims despite the uninterrupted efforts to coordinate through the International Committee of the Red Cross. “The Israeli occupation forces told the Red Cross Committee that Shujaiyya was a closed zone because of military operations,” the medical official explained.

As a result, added al-Qidra, Palestinian ambulance teams decided to take the risk and access victims despite the Israeli military orders.

Among the victims in Shujaiyya, according to al-Qidra, were teenage girl 14-year-old Hiba Hamid Sheikh Khalil and 38-year-old Muhammad Ali Jundiyya.

In addition, an Israeli airstrike on house of the Muammar family killed three brothers. Medical sources said Anas Yousif Muammar died of his wounds shortly after his brothers Muhamamd, 30, and Hamzah, 21, were killed in al-Juneina neighborhood of Rafah. Ten others were injured in the attack.